Circus Magic In The Park

It was a great day! Thanks to my Son @phineasjuggler I was on the list of performers for the weekly entertainment her in Queens NY at the Flushing Meadow Park's Fantasy Forest Amusement Park at the Carousel. Every weekend they have a performer to do a "clown show" at 2 and 4 and I was the performer today (Sunday July 7th) 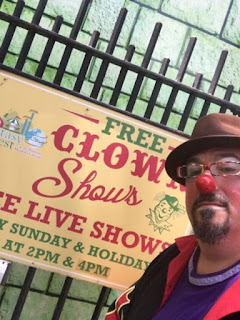 So I put on my Dr. Molar Magic Summer clown costume and headed out to the park. I arrived and set up my show in the designated performance area and then went about the gathering a crowd. This part of my job consisted of walking around the rides and interacting with the people on the lines, doing walk around stuff, small magic, and letting them know that the magic clown show will be starting at 2pm.
At 2pm we started the show. As the families gathered and the kids took their seat on the artificial turf put out for them and I started with some juggling. My shaker cups (a personal favorite) which are loud and visual. Once the crowd was settled it was on with the show!
My 30 minute kid show is fast paced and involves lots of audience participation. This show I added something new....the new Rocky The Raccoon Zig-Zag.....yes our old friend Rocky comes out of the magic closet and instead of just doing the usual gags and jokes, I place him into a vertical box slide bladed through him and move the middle section apart from the others! Its Rocky meets Harbin. The routine is fun to perform mainly because its just so ridiculous and in the end if a real fooler. I'm glad I added it to the set as it got a great reaction from the kids and their parents.
My finale is the Bells.....bells in the key of C covering a full octave and a few of the sharps/flats just in case they are needed. I line up 6 young volunteers and they each get a bell. Now if you want fun and comedy just give 6 little kids bells and tell them not to ring them until told.....yup its a tough one, but that's where a lot of the comedy and fun develops. We manged to get the kids under control and they were able t follow directions to allow this impromptu bell band to perform Twinkle Twinkle Little Star and of course the cell phones were videoing and taking photos of their performing kids!
After the last note and a colorful throw streamer the show was over and everyone had a great time.
I love this kind of show because the families come to the park and they know the rides are there and maybe they know about the show but they are not paying a fee for the show. They are staying and enjoying the magic and fun. I'm proud to say that the audiences were large and there was plenty of clapping and laughing. I know that when I have fun performing the audience has fun along with me, I'm happy to say the audience agreed.
Be Well and Keep 'em clean 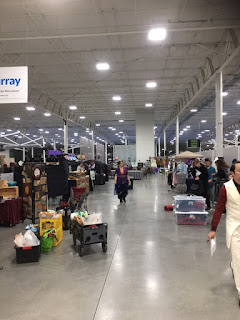